As we convened for the final time in the overflow black lot, BRES planned a Thanksgiving tailgate spread that was enjoyed by all. The turkey and stuffing filled potato skins was a great idea, Shane, but for the love of God, you've got to wear pants when it's supposed to get cold outside!  Although the season was a tough one to endure, thanks to all of the BREPNation.com for making the 2106 tailgate season a blast.

It's been a crazy week for me so apologies for the late idea notice, but Pete came up with a good tailgate theme, and Shane is planning to take it up another notch as, mercifully, we close out the home season vs. State Penn.

Kick-off is 8 p.m., and our team sucks but we appear to have great weather for this time of year.

Ticket-wise, Kathy and Evan have claimed Pete's 2 extras, so if others in the group have unused tickets please speak up.

Since we're trying to avoid all things bland or chain-like from central Pennsyltucky, we're going to put together a Thanksgiving-themed menu, with hot-sliced turkey (warmed on the grill) and all of the sides, either stuffed on a Nino's sub roll or Shane's idea...

The "Spudwich," using two fried potato skins as the bread that you stuff w/your turkey and other stuff.

The genesis of this idea came from Monmouth Park's food truck festival, where Shane savaged a turkey, stuffing, cranberry sauce and gravy spudwich. I tried it and can vouch for its tastiness.

We'll pick up the turkey (Costco has a good pre-cooked breast that just needs warming), do the skins and sub rolls and, with all of the byproducts of gutting a few dozen spuds, mashed potatoes.

If anyone has good Thanksgiving dishes, feel free to contribute. We could use stuffing (veggie or sausage) and gravy, in particular.  Desserts and drinks, of course, are welcome.  Bourbon might be involved.

Anyway, keep the chatter going in the comment field below, and please note what you can contribute to the Thanksgiving-themed spread.


Down our fearless leader Bill this week, we look to rebound against Indiana with a noon start. Let's get the tailgate discussion started. I'm guessing we are looking for a breakfast themed tailgate, so if anyone has some specific ideas lets throw them out now.
Posted by BREP at 10:22 PM 20 comments:

The Children R Our Future

We take a step back for a moment from the typical tailgate posts to present the artistic avant-garde musing of a Rutgers game day as taken by "BRES n SIS." 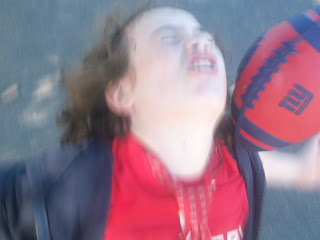 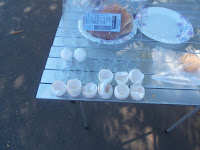 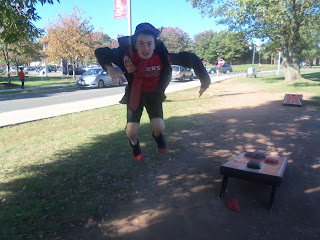 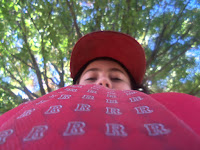 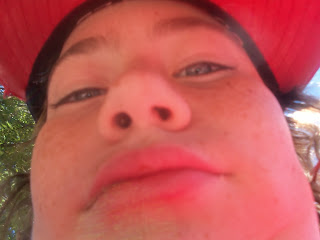 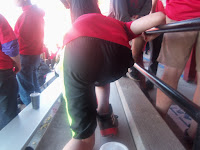 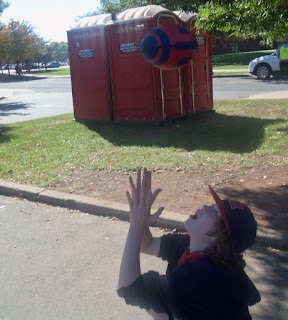 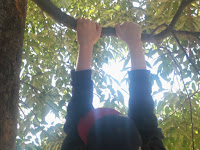 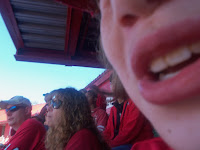 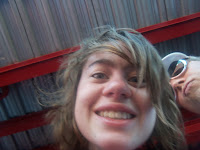 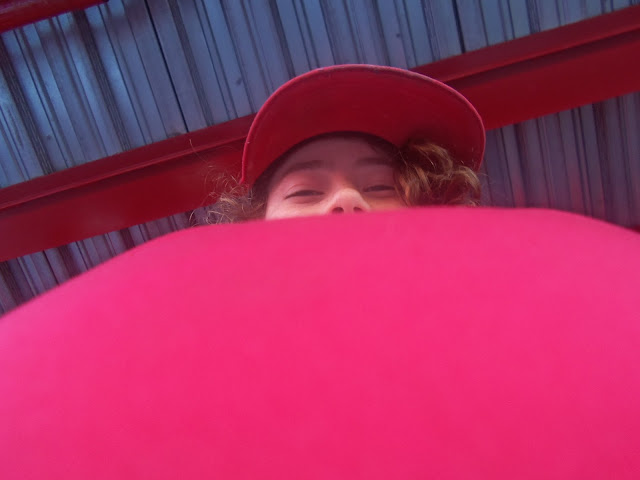 Shake It Off, B-REP Nation

We've got a few more hours to stew over perennial jerk-off and pleated khaki wearer Jim Harbaugh going for a 2-point conversion up 20+ points again for the second season in a row, but the season is not lost as our most-brutal stretch of games is done and we turn our attention to Lovie Smith's comparably hapless University of Illinois.


The Illini are 1-4 and probably have us circled on the calendar as their last winnable game.

Deservedly so after Rutgers losses of 58-0 and 78-0 in back-to-back weeks and with what is perhaps the most inept offense that I can recall On the Banks since my first home game in 1987.

Surely, however, Illinois is double-circled on our calendar as we look to go 3-4 and get our first B1G win of the season.

If nothing else, Saturday's tailgate was as convincing a pregame win as Michigan's destruction of the Scarlet Knights on the gridiron.

We have evolved into a Top 10-caliber tailgating group, even if Rutgers Stadium personnel are too lazy to come all the way out to the Black Lot to dub us "tailgaters of the game."  In our hearts and minds we know who's best.  Others may have RVs and couches, but find me another group that has its own publicity director and beer concierge.

And we don't need questionable monikers like "The Hunt" that serve to confuse our audience.

All main dishes and desserts were a hit, as were the Schaefers that flowed like a mountain stream and reminded all that "es la mejor, cuando se toma mas de una!"

After an 11-touchdown plus 2-point conversion loss, however, we may need to reconsider the karmic element of our growing South Amboy-Sayreville presence, what with the addition of the Brians and the Thurkauf twins and Dad.

Keep in mind, however, that these guys, are not the ones calling the minus-2 yard roll-out passes to the left, or playing O line and waving the matador flag for what seemed like 30 Michigan defenders per play, or running the hurry-up offense just to let our punter rack up a record number of punts. This was what BREP presented to his new coworkers John and Pete as entertainment.

Obviously their foodie and beverage prowess are huge pluses to B-REP Nation, and so we hope to see them back on the pavement vs. Illinois and elsewhere down the road.

Now, Saturday's was such a big undertaking that Festmeister's on a bye vs. Illinois, as are the Ungemahs, as the Scotts made their 2016 debut but will be back to the baseball diamond this coming Saturday, where rumor has it Jr. has already issued a combo home run hitting/Fat Cat food challenge to travel-team mentor and RU Alum Todd Frazier.

So, before the week gets away from me, I'm proposing that with a noon kickoff vs. Illinois that we meet at 8:45 a.m. this week at our usual carpooling spot.

As for food, it's all about "Cracked: The Egg Came First" -- the popular breakfast food truck at the University of Illinois -- and its "Vegasm Ciabatta Sandwich" and "Bacon-White Cheddar Tots." BTN featured these guys on the TV Network too.

Here are the things we need, and it's a combo we can do either vegan or with meats.

Let's start weighing in on this and get everything resolved by midweek if possible, this way I can hit Costco for whatever goods we need. I'm figuring, too, that we are OK on the beer front; figuring we have a lot left over from yesterday, but let me know if we look short. I know I have a few Schaefers left, and also Sam Adams Oktoberfest sitting around.

TICKET-WISE: I'm hoping Kathy will finally join us this week and would use Chris's ticket for that, but we also have Scott Ungemah's available and two of Dave's (Tom's using 1 of Dave's 3 on their dad). Great time yesterday up until kickoff, and more to come this Saturday vs. Illinois! 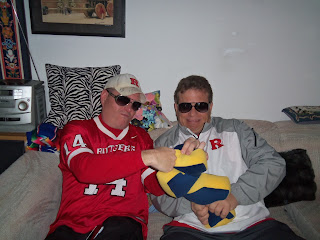 As Rutgers comes off of the beat down at #2 Ohio State, we welcome in the #4 Michigan Wolverines this Saturday Night. As he did last year, Chris has volunteered to helm the tailgate this week and with an Oktoberfest theme! I will leave the first post up to Chris to let everyone know what he intends to do, and what he needs or what everyone else can contribute. This may be the week it makes sense to give Chris some bucks to cover his costs if there isn't a need to bring additional items. Chris is also looking to score some extra tickets, so if anyone has any to offer, please let him know ASAP. 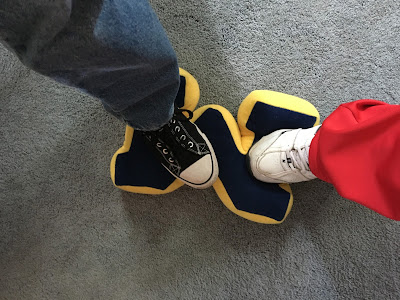 For this week's tailgate we were treated to hot off the grill cheese steaks from our BRES Father. With two grills going cooking the steaks, melting the cheese, and heating up the peppers and onions, the foods was awesome as we took our tailgate to the Black overflow lot for the first time this year. Kudos to BREB for dusting off the backup grill (found in the RU purple lot years ago) for use in our time of despair.

After throwing our money away to members of the Rutgers Cheer Squads on our usual fruitless effort to try and win the 50-50, we were honored to have our first tailgate
presentation ceremony of the year.

Adding to his growing list of accolades, BRES was presented with a football tailgating whistle, growing his arsenal of paraphernalia at his disposal on game day. As for the game, the RU football team put up their most spirited effort of the year despite coming in as a large underdog to Iowa. Even with bringing out all the stops (including the debut of the BRES popcorn rally bag),  RU came up short by a score of 14-7, as they were a few big plays going their away away from pulling off the upset.
Be ready to stripe the stadium for our next home game versus Michigan - REMEMBER TO WEAR BLACK RUTGERS CLOTHING AS WE ARE AN ODD NUMBERED SECTION.
Posted by BREP at 6:23 PM No comments: