As is usual for this time of September, the B-Rep Nation crew descended on the student center black lot for a fun morning of tailgating.  Although missing our faithful servant and second in command, ShaneHead (a.k.a. low res BRES) stepped in to full the gap nicely.


Thanks to Bill for his usual diligent effort of preparing the breakfast tacos of chorizo and eggs, and to BRES head for doing the cooking and dishing out the drinks. Kudos to Andrea for braving a severe foot injury that had her listed as doubtful for the game, but probable for the tailgate, and gutting out the pre-game festivities.

Basil took time out of his busy schedule to host his au pair friends and teach them all about corn hole and American football as "Basil's Angels" enjoyed the day. Please don't follow his advice on football betting.

Eric made his way to the Audi club again this week to treat us to ice cream and cupcakes. Next week Bill wants toasted coconut on his vanilla cup.

See everyone next week for a noon time start against Illinois. Remember to wear black to the game. Please start the discussion for next weeks tailgate below. 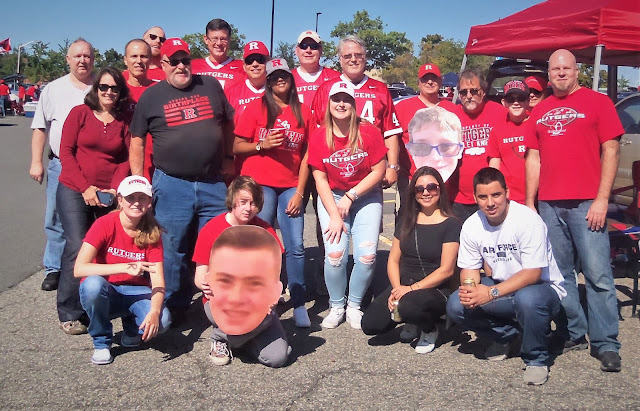 Thanks to all for your help and enthusiasm creating yet another great tailgate!
Posted by BREP at 3:46 PM 26 comments:

Alright, so the breakfast burrito idea really seems to have taken off, since Indiana isn't known for pig-out joints and such and, hence, no great original Hoosier themes.

For people bringing supplies or those who've yet to say what they're contributing (besides money), here's the roster:
Sunny and low-70s is the forecast, so at least we'll have that and good food on our side!


See ya Saturday in the Wal-Mart lot!

Heads of the Tailgate Additional Photos 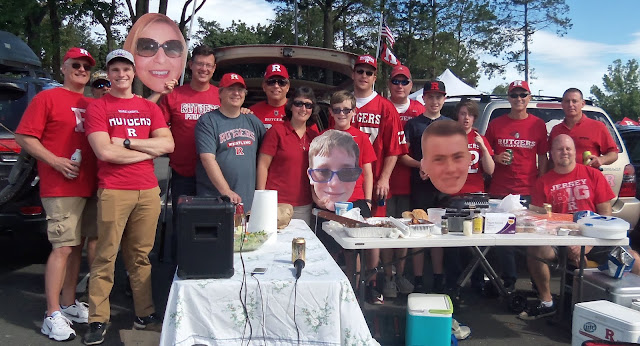 Thanks To Buffalo For Not Running Up The Score

If there's a constant in B-REP Nation it's that we're going to have a nice time and enjoy each other's friendship and company because, candidly, there's nothing on the football field worth watching at this point as we clearly roll to a 1-11 record.

It has gotten to the point where all of the best things for us happen before kick-off.

Sleeping on it for a night, it's clear that we're back to Shea-era ineptitude, with inconsistency at the quarterback spot, lines that can't seem to block or rush the passer, passivity on offense and defense, and as John alluded to, zero tolerance for risk; Flood at least gambled from time to time.

Ash is entirely vanilla, unless you like 1-yard out routes and never sending the kitchen sink at the opposing quarterback.

But, hey, on the bright side of things...

Saturday came with tasty buffalo wings as an appetizer, followed by the beef with weck that seemed to go off pretty well and was an easy prep.

Pete and Larry did an outstanding job flattering our youth with the ceremonial presentation of the Shane and David heads. B-REP did his best to get on the jumbo-tron and ESPN 8 coverage with slick dance moves, though we learned from yesterday that we'll have to get more people involved to get attention in the elbow-to-elbow crowd of 2,252 loyal fans who stayed until the fourth quarter.

As I sure Jennifer and Dave can attest, as parents it's awesome when your kids are embraced so much by our friends that they're eager to suck it up and give up sleeping in on a Saturday just to sit through awful football, yet still come away with a great experience and added confidence.

With that in mind, we face another beat-down this coming Saturday vs. Indiana on another noon kickoff.

The Indiana fare is sorta "meh" -- corned beef and cinnamon pancakes being the sorta "pig-out" foods that are big on the IU campus. If y'all wanna do one or the other that's fine, but I'm not wed to those ideas and wonder what folks are thinking.

Let's get the banter going and see what folks have in mind.

And by all means drop in your best photos here from Saturday.

Not much to say after getting our doors blown off by Kansas, other than it's gonna be a LONG season for us and I'm glad I spent Saturday on the beach instead, though on the bright side Nick's vulgarity meter is likely to explode next game, which should create some fun.

Yesterday is a good reason why, personally, I'm looking forward more to a return to the tailgating environment than the actual football game, which this week pits our Scarlet Knights against the Buffalo Bulls.

They're 3-0 and probably better than the NFL's Bills at this point, having beaten Delaware State, Eastern Michigan and Temple, which by the way dismantled B1G colleague Maryland, showing just how poor the lower-echelon teams in our league are to start the 2018 season and how nothing is going to be a gimme for RU the rest of the way.

Probably a good thing we got our one win out of the way this season.

Anyway, maybe this week the coaching staff's going to discover that the Big Kielbasa is color-blind and hook him up with special eye wear, preventing him from being so generous to the other team; or increasingly clueless-looking Chris "Can't Spell SHeA Without" A-S-H will scour the parking lot tailgate pregame to find a guy that can get open and catch a football, or tackle.

In the preseason email I had proposed a few buffalo-themed ideas for a tailgate. These work?
We're looking at a noon kick-off again, so how's about we meet at 8:45 a.m. in the Costco lot.

Three Hobos (and Kaitlyn's friend Erin, if we've got an extra ticket) are looking forward to seeing the crew again on Saturday!
Posted by Bill Holobowski at 8:54 AM 17 comments:

BREP NATION returns for the 2019 season to enjoy a Scarlet Knights win!

After a long offseason and an exhausting pre-tailgate Friday afternoon addressing parking pass allocations, Car Number designations/occupents and late breakfast cooking options, BREP Nation reconvened in the supplemental black lot to start the 2019 season. Down the BRES family, Basil, and a few key LaBues, Chris stepped up to get us organized, as well as taking on the grill chores to get the cooking done.


Welcome to Dana partaking in his first tailgate as an official BREP Nation member. Cousin Bob, Glen, Donna, nephew Indy, (not Southside) John Lyon, all aptly stepped in to fill out our crew. The fierce corn hole action returned in a Sayreville alum brawl with the Twins taking down Bob & Glen.
John added to the morning event by buying a red tailgate tent. This will be his last RU game before going to Sweden for work, cheap unassembled furniture, and the meatballs.  A Rutgers car magnet was presented for use in Sweden to remember BREP Nation.

Game day anticipation was high in the tailgate for the debut of the local kid at QB, Old Bridge's true freshman 18 year old Artur Sitkowski (some how not related to any of our  many BREP Nation members of Polish ancestry). Not lost in this excitement was also the start at left guard of South Amboy's own Nick Krimin opening holes for the ground game. Rutgers did not disappoint with RBs Raheem Blackshear and Jonathan Hilliman each scoring two touchdowns to defeat Texas State 35-7 in the season opener.


The next home game is set for Saturday 9/22 against the Buffalo Bulls at 12 PM noon. Check back next week for the tailgate discussion.