For this week's tailgate we were treated to hot off the grill cheese steaks from our BRES Father. With two grills going cooking the steaks, melting the cheese, and heating up the peppers and onions, the foods was awesome as we took our tailgate to the Black overflow lot for the first time this year. Kudos to BREB for dusting off the backup grill (found in the RU purple lot years ago) for use in our time of despair.

After throwing our money away to members of the Rutgers Cheer Squads on our usual fruitless effort to try and win the 50-50, we were honored to have our first tailgate
presentation ceremony of the year.

Adding to his growing list of accolades, BRES was presented with a football tailgating whistle, growing his arsenal of paraphernalia at his disposal on game day. As for the game, the RU football team put up their most spirited effort of the year despite coming in as a large underdog to Iowa. Even with bringing out all the stops (including the debut of the BRES popcorn rally bag),  RU came up short by a score of 14-7, as they were a few big plays going their away away from pulling off the upset.
Be ready to stripe the stadium for our next home game versus Michigan - REMEMBER TO WEAR BLACK RUTGERS CLOTHING AS WE ARE AN ODD NUMBERED SECTION.
Posted by BREP at 3:23 PM No comments:

Now that we are up and running again, BREP-nation.com is back and bigger than ever.

As per Bill's earlier post:
"I'm ordering enough steak (and prepping home fries and onion & pepper) for 25 people (~ 8 lbs. of meat), so if you plan to bring several others to the table let me know ASAP and I'll order more......
I need to pick up the meat Friday by 6pm, so speak soon if you're bringing a ton of people along. We'll DEFINITELY need the second grill this week, mainly for warming the spuds and O&P. Someone needs to borrow one from a neighbor or something if Basil and Scott are not around." 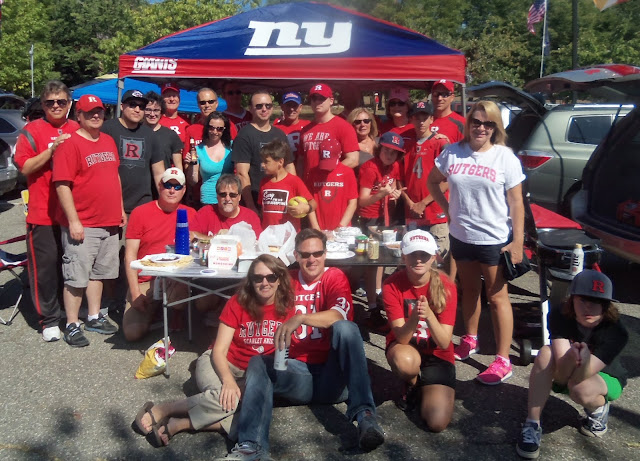 With another noon time start for this week's game, looks like we'll keep the 8:45 AM meet up time at Walmart. Pete has already pledge to get things started with making Breakfast Burritos. Let the discussion begin on who can bring what this week.
Posted by BREP at 4:10 PM 12 comments: 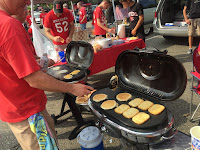 The Brepnation.com crew convened on a sweltering hot morning in the Walmart parking lot to kickoff the 2016 RU football season. Brave souls Bill. Scott, and Basil slaved over a hot grill in high humidity and heat to produce a great breakfast fare of eggs, ham, pan cakes and hash browns for the group of over twenty to chow down on.  A thrilling corn hole match came down to the wire with BREP & BRES narrowly escaping with a victory (on the last bag thrown) over the Bad Girls team.

In his regular ritual of reinventing himself for every new tailgating season, after a strenuous off-season workout regiment including a steady diet of Xbox games, BRES bring a new power packed beverage delivery with his Big Red Fist (i.e. the BRF) to add muscle to the Brepnation tailgate. The beers are even colder and tastier when delivered in this finely crafted Scarlet clenched hand (with a minor gratuity expected, of course, or deal with the fist of fury). Precisely sculpted to BRES's specific hand dimensions without affecting his dexterity even under sub-zero can temperatures, expect this newest tailgating sensation to begin to pop up all over the Black and Purple lot in coming weeks by BRES wannabes.

On the way into the stadium, it was evident that new Rutgers Head Coach Ash was leaving nothing to chance in making sure to bring out the big firepower including the US Military and Rutgers Banana Guy, who appears well on his way to filling the void left by a missing in action King of Sandy Hook. After a rough start, and a tie at halftime, Rutgers rolled to a big win in the second half.

A big thank you to our photo journalist Julie W., who documented the day with the fine pictures shown hear on the blog.

Next week is another noon time start, so expect to meet at 8:45 PM again at the usual place. Details to follow later this week.... 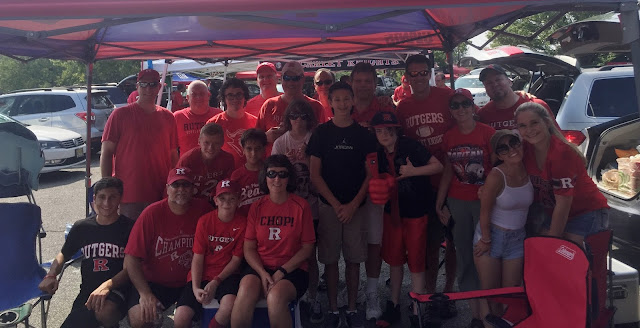 Rutgers vs Howard tailgate - An Offer You Can't Refuse 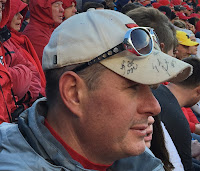 You owe your tailgating leader (aka the "BRESfather") a service, as has started a new job this very day, and has limited time to organize this week's tailgate.  I have no doubt that you will repay him. One day, we knew he would call upon you to do a tailgating organizational service for him. That day has now come.  This weekend, as he will be at our tailgate, I ask for your help. Be there to greet him.

Well, my friends, are you ready to do him this service?  I want you to use all your powers, and all your skills, to help prepare an excellent first tailgate, or prepare to face the consequences.
BREP

We need input as to what to do this week - a breakfast tailgate, or a simple burger and dogs tailgate?
I pledge to bring a case of Yuengling.  What do you pledge to your BRESfather?