Despite 3 key tailgate players on IR for homecoming, BREP Nation put on another bowl-worthy performance, with everyone ready to go by 8:30 a.m. and the tailgate spot established 20 minutes later.

Jennifer Labue, a multiple-game cornhole winner with son David until Kathy found her groove to give Team Hobo a last-second win, pointed the crew to a proper parking spots, making her the favorite to lead our search next out in early November vs. Wisconsin. If husband Dave drives her SUV in again, however, it's probably safest they bring up the rear. But he has 4 weeks to practice his parking skills on a vehicle 6x the size of his Miata days.

It was great to see Dave's dad once again after about two years, and the usual crew was graced by a rare twice-in-one-season appearance by Kathy H, subjected to 58 minutes of Rutgers game action in which the defense let up big play after big play and the offense missed key opportunities in a 31-13 defeat vs. 11th-ranked Michigan State.

The result on the field wasn't what we had hoped and bucked Bill's win guarantee earlier in the week, setting the Scarlet Knights back to .500 at 3-3 but with several winnable games on the schedule. Next is at Northwestern on Saturday at noon.

The outcome was different in the parking lot. Pete came through with fabulous breakfast "burrpete'os" and the necessary dressings. If you didn't top yours with sour cream and salsa, turn in your tailgater badge to the principal's office.

Bill's "Jersey tomato casserole" proved to be a hit, especially the batch with pork roll. Probably a good lesson to not bother with the veggie-only version, which wasn't touched as much.

Dana came through with a tasty bagel spread seemed to have been devoured, leaving only a handful and some everything-bagel crumbs for him to steal from under our noses and take to his "other" friends in the yellow lot. (BREP Nation sources could not confirm rumors that Dr. Jacoby is known to buy 12-packs of beer to bring to parties, only to arrive with maybe 3-4 at best.). L'Chaim, Dana! Chris too.

"Breakfast bourbon" proved semi-popular for the crew, with several sampling the Vermont-made version infused with maple syrup. Sweet way to start the day, and one we may need to expand for a breakfast tailgate as a pancake topping. Solid idea from Andrea, if I recall.

Appearances by the Burks friends and the Thurkauf twins and Frank added to the atmosphere.

The crew packed up by 11:30, walk-in beers and bourbon in hand, and entered SHI(*) Stadium on time for the start. Rutgers wisely opened an additional entry gate; but with a disappointingly half-empty building, it's possible the low turnout made for such an easy and well-timed entrance.

We've already got Kaitlyn working on improving the morale and turnout of fellow students. It was pretty weak sauce from the tens of thousands of students with access to free tickets and not showing up.

Once seated, BREP Nation did everything possible to motivate the team. Dana was responsible alone for consecutive MSU penalties and a big offensive play after deciding to join us sometime in the second quarter. Yet our process of seat switching, Popcorn Pete and third-down air guitaring did little to change the outcome.

Schiano's squad just isn't there yet talent-wise, but bright days are ahead, with five of our last six seemingly winnable games vs. similar competition -- Northwestern, Illinois, Wisconsin, Indiana and Maryland. And if Penn State's starting QB is out for any length of time, who knows.

Stay tuned to the blog for details on the next game and perhaps even the Oct. 30 Halloween extravaganza in Roselle Park.

Everyone be well and please share any good pictures from MSU here! 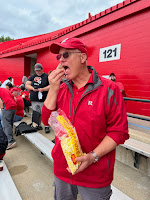 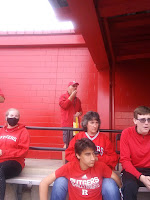 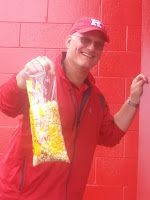 Posted by Bill Holobowski at 2:05 PM No comments:

It's time to look ahead after seeing the team I support -- and the other one I begrudgingly watched Friday night and help to fund via out-of-state tuition -- give up a combined 110 points to infinitely better teams.

This Saturday it's  No. 11 Michigan State on the Banks. Noon kickoff.

The Spartans are 5-0 and have feasted on cupcakes. Nebraska gift-wrapped it a W, and MSU's win vs. Miami may be its best, but that's even a borderline .500 team.

So to me RU is hands down MSU's stiffest test.

Heck, I'll even predict we win on homecoming day. So there, let it be said!

And let's be real. Schiano and Rutgers OWN the chop. Not Michigan State. RU's going to be plenty pissed about MSU's breach of intellectual property.

Please start the roll call in the comments below.

Saturday's forecast is iffy -- high 60s/low 70s and morning rain possible, so anyone with a canopy please bring it. At least we're under cover in the seats, and it won't be cold.

As I missed the OSU debacle, perhaps y'all discussed the menu for MSU already; but if not, I'm happy to whip up a few Jersey Tomato Casseroles and others can bring sides (potatoes, bagels, etc.).

Otherwise as it's our last game during official Oktoberfest (next one not until Nov. 6), that's another option if Chris or other wanna run (and as Michigan is home to one of the bigger U.S. Oktoberfests). I'd like to take a breather from intense grilling after back-to-backs for Delaware and UMD. Warming stuffs fine, but I don't have the energy to make custom egg orders for all.