After another pummeling at the hands of Minnesota by a score of 42-7, there aren't many positives to the game itself other than the fact we scored.  For our only afternoon start of the season the tailgate began on a somber mood as we once again were saddened by the lack of BRES at the tailgate. Rumors are that with another missed tailgate his scholarship may be pulled.


Luckily we were joined by the BRES mother Kathy and  several other members of the Holobowski lineage to enjoy the awesome cheese stakes prepared by Bill, who again deserves a hand for pulling together another great tailgate. If we didn't have Bill's enthusiasm every week I'm not sure we could keep coming  for these games. Dana also requested some soul and got a dose of Sam Cooke.


A personal tailgate highlight was the first perfect round of 4 ringers in corn hole for a walk off win. On the way into the stadium we also got our first look at the new Scarlet Knight statue. 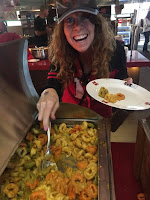 Audi Club Eric was up to his old tricks again, this time corrupting Provident
Bank Club Kathy to join him on his mission to live the good life. Some of us are still waiting for a cup of vanilla ice cream with sprinkles. As we became bored with the second half, a new goal was attained. The Brepnation crew banded together to eat a record 10 refills of Pete's RU popcorn bucket. I am still processing my contributions internally.


Well meet again next week for a noon start against Liberty where RU will only be a 7 point underdog. 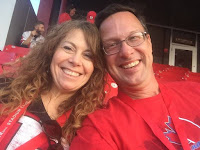 Who knows, maybe we can mount a challenge to the Fightin' Falwells.