As the BREPNation.com tailgating crew took to the Black lot for our season ending tailgate for the Rutgers-Maryland match up, the morning started with very favorable weather for a breakfast buffet. It was the start of a day of highs and lows for the crew. Little did we know that after a great half of football by the Scarlet Knights, the Terrapins would come alive in the second half as an unstoppable offensive machine to get even with RU for the dramatic comeback win we had in College Park to end the 2014 campaign. It would also be the end of Kyle Flood's tenure as head coach, and culminating in the firing of both Flood AD Julie Hermann the next day.

For several years our group (and in particular BRES) has had a fascination with Rutgers Fan/Tantoo Artist (and apparently also damaged goods), the one and only King of Sandy Hook!
Not only were we treated by the presence of the King at our tailgate, we were transfixed on his every word as he told us of his Xanax fueled adventures, recent incarcerations, and the dangers of being a tantoo artist. After finishing the tales of his exploits and having a brew to go on his way, the king treated his biggest fan with a "Birthday" gift T Shirt. Yes, BRES, Believe! 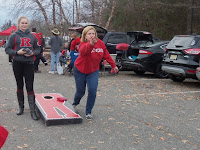 The spirited corn hole action was ongoing for the bulk of the tailgate, started by a heated battle between the Next Gen and the Old Guys, with the youngsters coming out on top. The fiery match ups continued right up to the end of the tailgate, with bags in the air right up to kickoff! 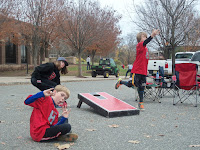 Unfortunately, all good things must come to an end, and we must now look forward to next year with a new head coach and a new athletic director to hopefully lead us in a new winning direction. Thank you very much for the 2015 season BREPNation.com tailgaters! You have inspired us for the last magnificent 7 tailgates. You have excelled in your corn hole competitions. You have shared your emotions with us and the whole RU world. You have celebrated victory with dignity, and accepted defeat with dignity. I declare the 2015 Rutgers tailgating season closed. In accordance with tradition, I call upon the youth of the world (and BREPNation.com) to assemble 9 months from now in the parking lots of Piscataway to celebrate with us the 2016 Rutgers football season!