From time to time, the research team here at BREPNation.com will dig into the archives to find memorable trips and tailgates from Rutgers seasons past to look back on. As we are without a bowl game to attend this year, we look back to the end of the storied 2006 season when a 10-2 Rutgers team went to Houston to face Kansas State in the inaugural Texas Bowl.  Hard to believe it has been nine years since our tailgating crew went on their first bowl game in mass, planting the seeds that would grow into our current twenty plus group.


At the time of this trip, there was no BREP concept, BRES was 3 years old,  and our group had 3 season tickets that year. The anticipation of possibly seeing Rutgers first bowl victory EVER in the football program's then 137 year history, as well as playing at the brand new Reliant Stadium, was too much to pass up. Basil was also flush with ideas on how to renovate the adjacent, recently vacated Astrodome (another story for another time). It was a cool experience to stay in the same hotel as the team with most of the rooms taken by RU fans, and we even got to share an elevator ride with Randall, the Rutgers alum who won The Apprentice that year.


After spending some time in  downtown Houston having a few cocktails, we took to the Houston rails to get over to the Rutgers Alumni tent to get fired up for the big game.


On our way into the stadium we ran into possibly the #1 Rutgers fans we know. It truly wouldn't have been a a big game if Dennis's parents weren't there, (obviously without Dennis). Bill also did  a great job of getting us club level access seating. 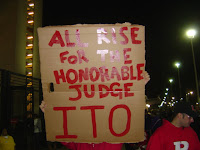 The RU team didn't disappoint, putting up a memorable performance in front of a sea of Scarlet clad fans who made the trip for a cap to a great football season. 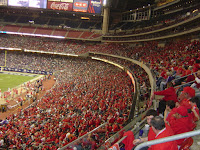 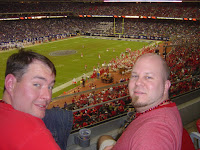