The Scarlet Knights finally came through with a B1G home win vs. Indiana, beating the Hoosiers 24-17 on a picturesque homecoming that provided the backdrop for yet another great BREP Nation tailgate!

It was a beautiful autumn morning that started out in the high 40s but quickly warmed as the day progressed. The menu was solid enough, with a normal breakfast fare of scrambled eggs, homefries, pork roll, bacon, bagels, pastries, Kentucky and New Hampshire bourbon and Natty Bo. The turnout was favorable too; just a great bunch of folks to make an autumn Saturday all the better.

On the boards, the highlight was perhaps Kathy's 3 bullseyes in her and the author's double-digit thrashing of the Eric-Pete duo.

As generous as our buffet was the group inheriting a seat two rows in front of us from a fan who left Section 121 early. Between that and the gift of a Rutgers home win, an early Thanksgiving blessing!

Rutgers is at Minnesota next week, with a 2:30 p.m. kickoff. It's a huge game for the 4-3 Knights, who are still very much alive for a .500 season and bowl bid. Of course a Nebraska win would have made that road a lot less rocky, but beating the Gophers, also 4-3 overall and 1-3 in conference, puts us in a good position with four games to go. Our next home game is Saturday, Nov. 5 vs. Michigan, kickoff at 7:30 p.m. (Some vintage Ann Arbor trip pics below).
Kickoff is TBD but it's not too early to discuss tailgate menu options. A few tailgates ago vs. the Wolverines we crafted sandwiches from the Maize and Blue Deli in Ann Arbor, MI, which were a big hit and fairly easy (mostly cold cuts and home made cole slaw with toppings). We could revisit those or go elsewhere (e.g. Oktoberfest menu, Jim's Blimpie burgers), so let's get the chatter going.

It's all the more exciting to think about off a win! 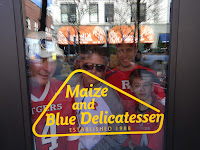 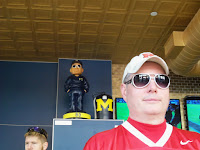 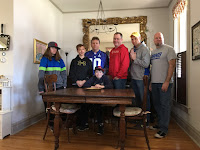 Posted by Bill Holobowski at 11:09 AM