Clearly, the Rutgers Scarlet Knights were a more relaxed squad without the excessive booing and heckling of Chris Skurat, Basil Kmech and Scott Fitzgerald, who were absent from Saturday's 14-12 win vs. Purdue but missed by their compadres in B-REP Nation.

It was the second-straight B1G victory for a Rutgers squad that could be 4-3 and two games away from bowl eligibility but instead is 3-4 and may have a few more wins in it yet fall short of the requisite 6-6 record to qualify. It's not the 2007 squad but they're playing hard and clearly an improvement over Chris Ash's debut season. It was nice getting a conference win and in nail-biting fashion.

The weather in Piscataway was fantastic again -- sunny and mid-70s and extremely comfortable inside the stadium.

In the black lot, the B-REP Nation was a bit lighter than usual but still represented well, serving up a fantastic spread highlighted by our rendition of the Thurmanator -- big burgers with 3 kinds of cheese at once, plus bacon, ham, pickles, banana peppers, sauteed onion, tomato, lettuce, ketchup and mayo...if you did it right.

Jennifer's anti-cheese, but the Labue family made amends by bringing the glazed crumb cake again from Mueller's. It also was good seeing Tom and Dave's dad. Younger brother Roy couldn't make it again, as he's busy getting paid to teach students how to kick someone's ass.

The Tinton Falls Scotts -- dad and son -- made it safely with Evan, who was slotted in as the substitute BRES for the absent orienteerer Shane but ultimately replaced by Dave's eldest, who was quick on his toes and reportedly a capable replacement in answering to BREP's rants and expedient requests for a cold Yuengling. I'm not sure he cleaned out Larry's wallet on concessions like Shane, but it was a job well done! (We're not sure that BREP was aware that Evan is extremely fast on his feet -- to the point where he has already broken freshmen running records at MRHS.)

As it was homecoming weekend, our Section 121 crew was visited by Sam-Beth and Chrissy-John, as well as Fred and Suzanne Simon, who were eager to discuss the finer points on bourbon, among other things.

In the end, it was another example of why we deal with the tragedy of Rutgers football...it's more about the friendships and camaraderie.

As most of you are aware, we meet again in two weeks...at Rutgers Stadium for the Maryland game. Fortunately, the Yankee Stadium idea went kaput. We hope to have details shortly on how parking passes and tickets will work out.

Anyway, our game at Michigan kicks off on Saturday at noon.

We meet at the Burk's house for their Halloween party at night; looking forward to it! 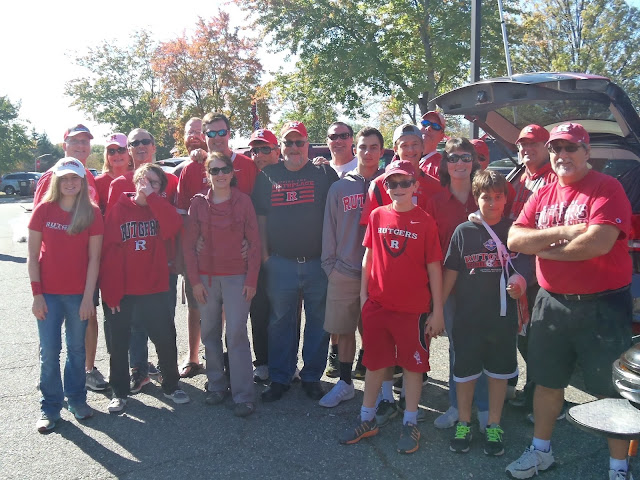 Posted by Bill Holobowski at 9:30 PM